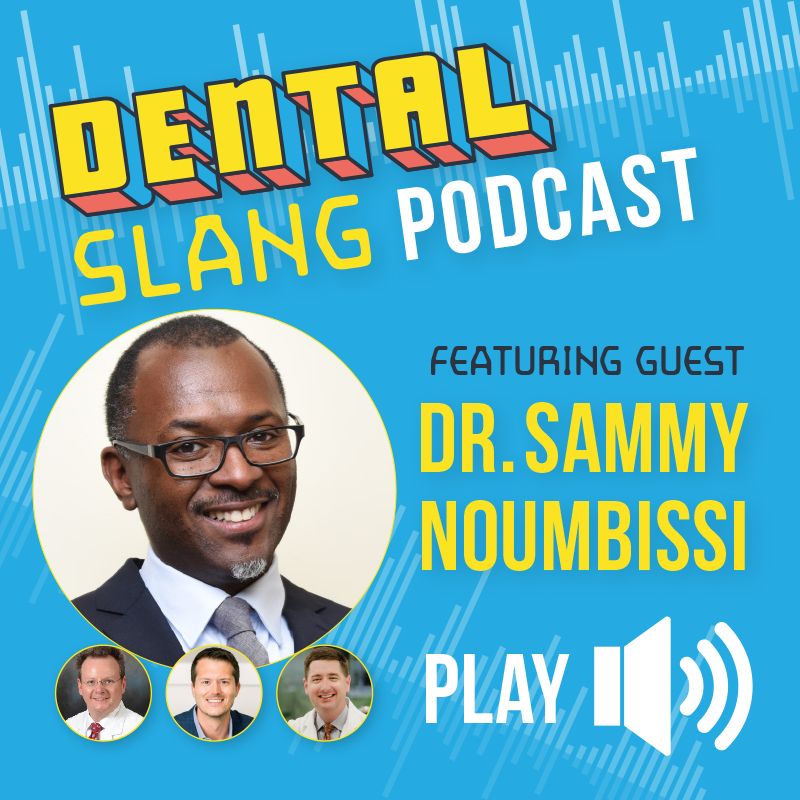 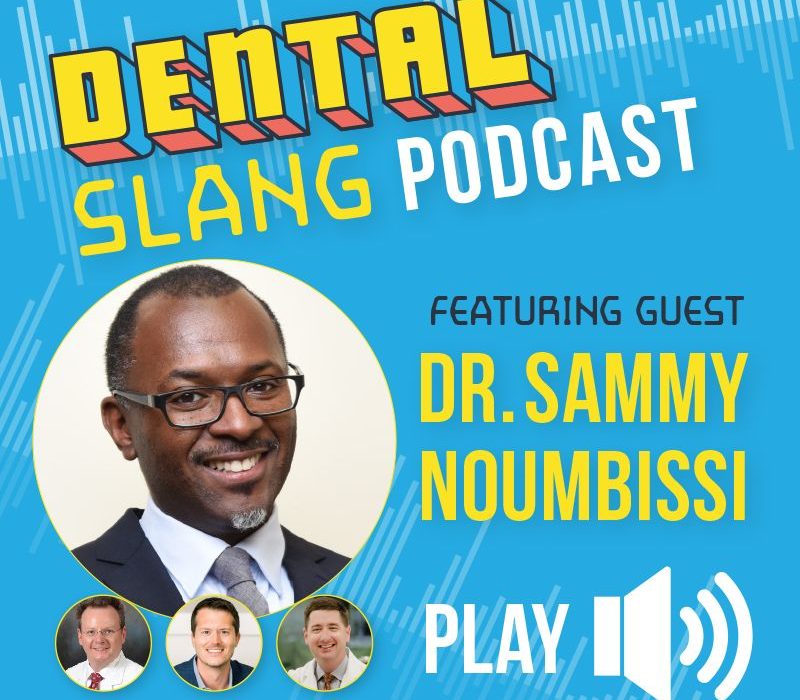 Dr. Sammy Noumbissi is a dental surgeon and provider who changed the game decades ago by adding ceramic implants to his repertoire. While other dentists continued to use titanium implants.

Dr. Noumbissi built his practice by listening to his patients. His first decade as a dentist was traditional, working as a general practitioner and using titanium implants. But when he returned to practice on the east coast, he started to work with a different type of patient. The patients in his neighborhood prefer a holistic approach, and they began to ask questions about the kinds of materials he was using in his implants.

Today, our patients have the same access to information that we do and often come into the office with in-depth questions or recommendations of the kinds of treatments they want to have. Dr. Noumbissi recommends that dentists humble themselves and listen to their patients. Then, when they come to us with questions about new procedures or technology, you can take it as an opportunity to learn.

Because ceramic implants will not be for your conventional patient, Dr. Noumbissi goes through the protocol he uses to determine if his patient is the right fit for ceramic implants. We discuss the systematic approach he uses to assess patients’ health and lifestyles and how it will impact how patients react to different implant materials.

Dentistry isn’t the typical industry that is run by consumers, except when it comes to implants. But until dentists get involved with these new media and materials, the market will always be missing something. Ceramic implants need the eyes of multiple dentists on them. We are the ones who know teeth the best, and we will think of the solutions necessary to improve these products for our patients. Change like this isn’t easy, but it can get easier with dentists like Dr. Noumbissi running ahead for us. 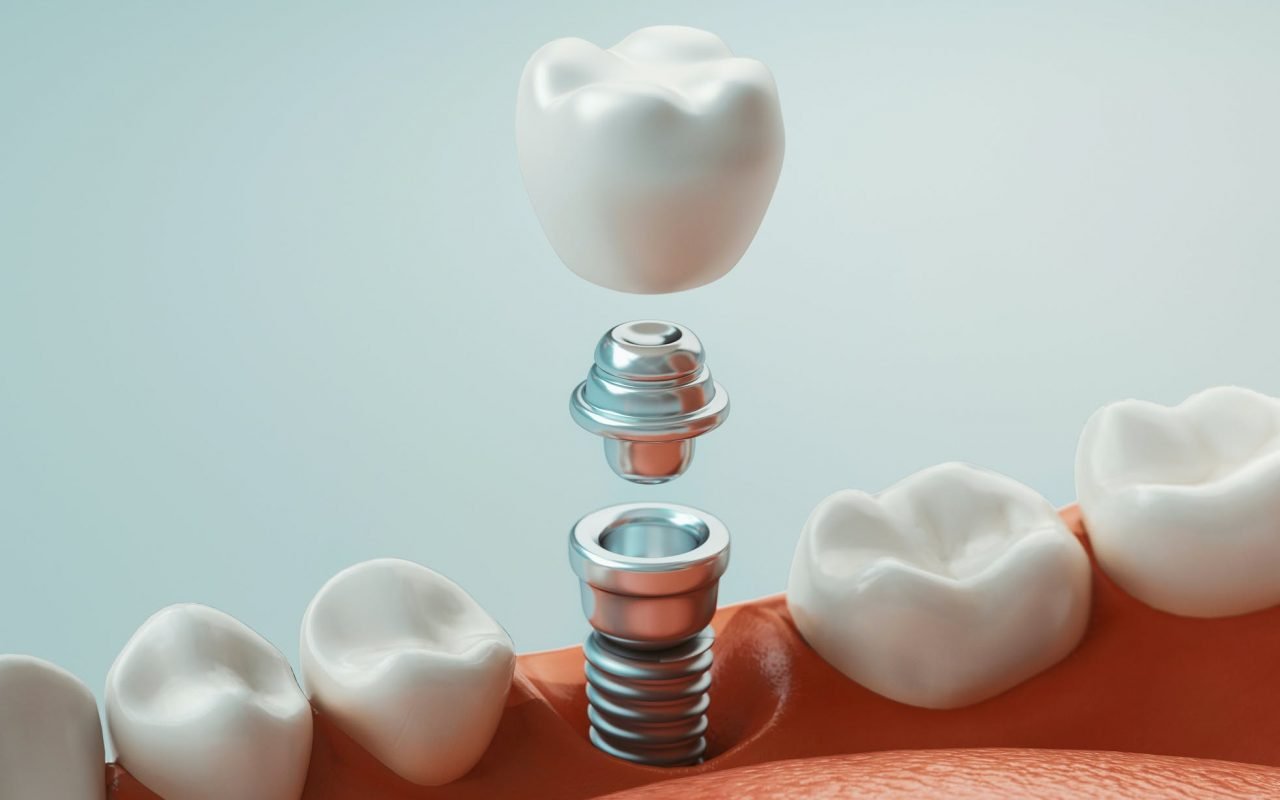 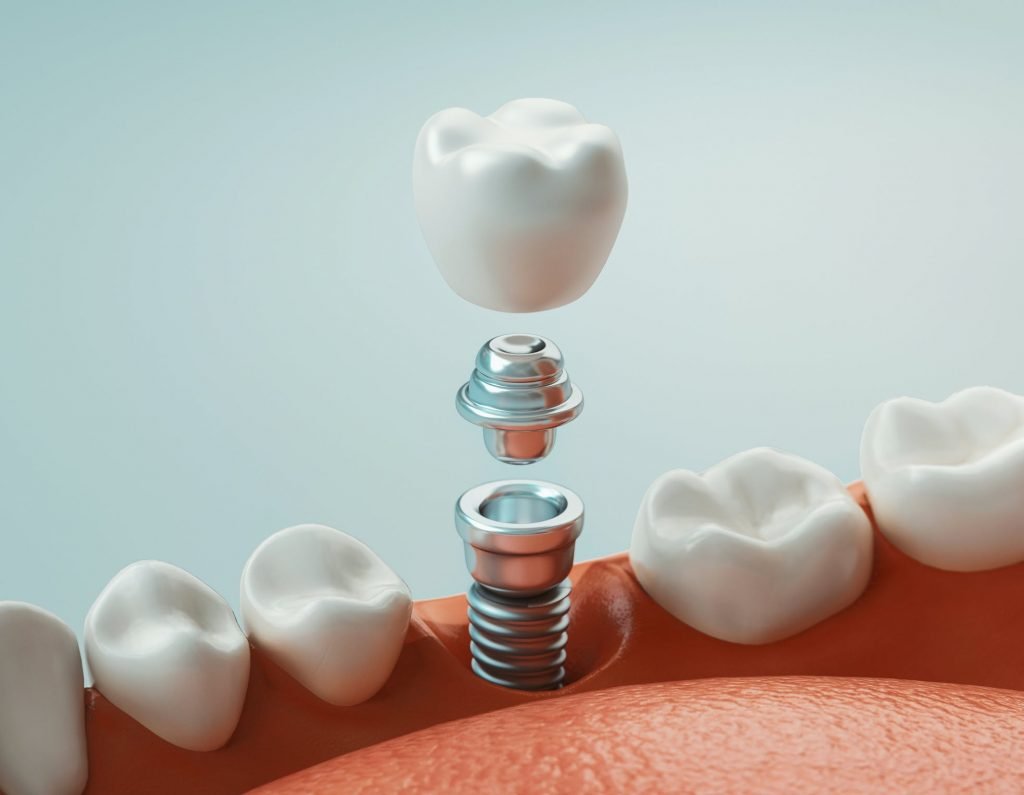 By Akilah Wise on Medtruth.com

Star of the “The Dick Van Dyke Show” and scene-stealer in Disney’s “Mary Poppins,” Dick Van Dyke is best known for his happy-go-lucky brand of charm and humor. Born Richard Wayne Van Dyke in December 1925, the award-winning entertainer has dazzled audiences for decades. He even appeared in “Mary Poppins Returns,” Disney’s 2018 sequel to the 1964 classic, giving a delightful dance performance in a cameo role.

Yet, behind that youthful facade, Van Dyke had been suffering from excruciating headaches, chronic fatigue and insomnia for years. An MRI, spinal tap and other tests came back normal, as Parade and other publications reported in 2013, leaving the origin of his illness a mystery.

“Tests and scans have yet to reveal a specific diagnosis. Various medications have not diminished the symptoms,” his representative, Bob Palmer, told USA Today at the time.

While technically in “good physical condition,” Van Dyke was forced to cancel a 2013 appearance in New York City due to “fatigue and lack of sleep resulting from symptoms of a yet-to-be diagnosed neurological disorder,” his publicist told the Los Angeles Times.

“My head bangs every time I lay down. I’ve had every test come back that I’m perfectly healthy. Anybody got any ideas?” he tweeted.

Several weeks later, he returned to Twitter to update fans. “It seems that titanium dental implants are the cause of my head pounding,” he tweeted. “Has anyone else experienced this? Thanks for your replies.” His tweet received an estimated 200 hundred responses.

Van Dyke’s quest for answers highlights the mounting concern over dental implants, the use of which has grown over the last 20 years. Recent research is now exploring the effect of dental implant surgery and dental metals on human health.

A dental implant is an artificial tooth root that is screw- or cylinder-shaped and placed within the jawbone to hold a replacement tooth or bridge. Implants are generally used to replace damaged and missing teeth. The “roots” are typically made from titanium due to its “excellent biocompatibility,” according to Implant Dentistry: A Rapidly Evolving Practice.

Yet, titanium roots can also include nickel, cobalt, gold and mercury. Although these metals are considered safe for human use, the electrolytes in human saliva may corrode the metals, triggering oral allergic reactions.

A 2018 study found that dental implants can cause symptoms for people allergic to metals, explaining headaches, like those Van Dyke experienced, as well as muscle pain and indigestion.

While metal sensitivity to titanium appears rare, a German paper suggests it may arise in the bone healing process after implantation. The 2006 study examined metal sensitization to 26 metals, including nickel, cadmium, gold and titanium dioxide, using blood samples from 700 patients. Study authors found that three-fourths of patients were sensitive to at least one of the 26 metals tested, with the most common being nickel (68.2 percent), cadmium (23.7 percent), gold (17.8 percent) and palladium (12.7 percent). Only 4 percent were sensitive to titanium dioxide, which is the oxide of titanium. A layer of this potential allergen forms naturally around dental implants as the bone heals after surgery, according to a 2017 review of titanium alloys in dental implants.

A year prior to Van Dyke’s Twitter plea, research in the British Dentist Journal suggested dental implant surgery caused nerve damage and could lead to problems with pain, speech, eating and kissing, as BBC News reported. More than half of the 30 study participants reported constant pain or discomfort after surgery.

A 2016 review in the British Dental Journal concluded it was impossible to establish such a causal link after examining 23 studies investigating dental implants and oral cancer. Study authors caution that oral cancer may often be disguised as peri-implantitis, a form of gum inflammation around the implant that destroys gum and bone tissue.

Similarly, a 2017 systematic review in the Journal of Oral & Maxillofacial Research found no direct link between dental implants and oral cancer, but noted several cases in which oral cancer around dental implants was “camouflaged” as peri-implantitis.

Although the studies don’t establish a link between dental implants and cancer, the authors do advise oral health providers to exercise vigilance in distinguishing peri-implantitis from oral cancer when making a diagnosis.

The major professional dental organizations, like the American Dental Association and the American Association of Oral and Maxillofacial Surgeons, maintain that titanium-based dental implants are a safe and long-term solution for missing teeth. The ADA, however, suggests that patients with chronic illnesses, like diabetes, may not be suitable candidates for the implants. The AAOMS does not mention metal allergies or the potential for side effects from dental implants on its website.

However, that may change with the release of over 5 million secret reports of medical device malfunctions and injuries, including 2.1 million for bad dental implants. Housed in a hidden database, the trove of reports had gone unnoticed for over two decades by the U.S. Food and Drug Administration. The millions of cases included more than 114,000 bad dental-implant reports logged just last year — with many related to problems with the device adhering to the bone, as reported in Kaiser Health News.

“A lot of people have gone out and gotten these and probably don’t know about these risks,” Madris Tomes, a former FDA manager and founder and CEO of Device Events, told Kaiser Health News.

As for possible risks, a MedTruth review of informed consent forms from various dental centers, as well as a sample consent form for dental implant surgery on the International Dental Implant Association’s website, found the documents did advise patients of various potential side effects and allergic reactions. However, the consent forms made no mention of side effects from titanium or other metals.

“It is essential that patients considering having dental implants are made aware of the risks, as well as benefits, associated with this procedure,” he told BBC News. “Dentists must ensure that their patients are fully informed and understand what is involved so that they can provide informed consent.” 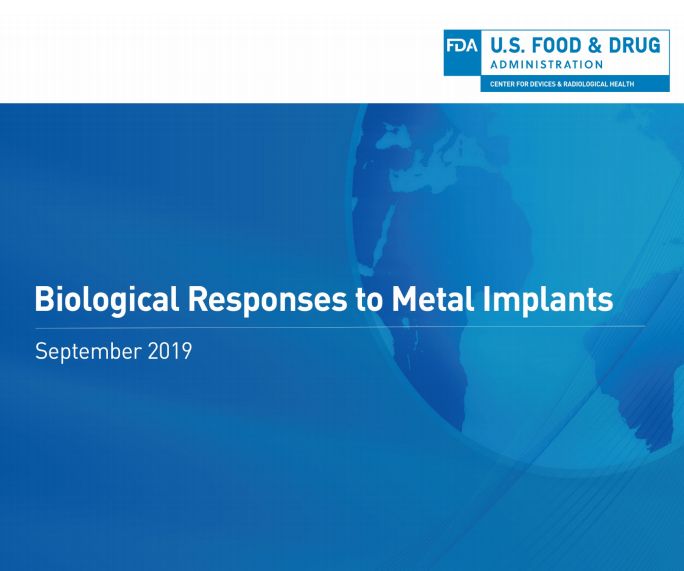 When it comes to implants, titanium is still the material of choice. However, there is an increasing number of critical discussions surrounding this material. Implant failures, biological incompatibilities both undiagnosed or misdiagnosed, and the release of titanium particles or ions are the subject of recent scientific publications and lectures. At the centre of the discussion is the in situ behaviour of the titanium oxide layer, which has long been believed to be decisive for the biocompatibility of the material. It now seems increasingly evident that once the implants are under function and physiological stresses there are losses of efficiency, owing to the fact that it reacts to influences of the human body as a biotope  such as changes in pH and adverse mechanical challenges.

The FDA (Food and Drug Administration) has now taken on this issue. Owing to an increasing amount of feedback from concerned patients and clinicians who are complaining about both local and systemic reactions, disparities in testing modalities pre and post implantation and their specific applications. The United States FDA is currently taking a closer look at medical devices containing metals and their impact on recipients of metal dental and medical implants.

Based on current findings regarding metals as implant materials, Subject Matter Experts (SME) from different departments of the Center for Devices and Radiological Health (CDRH) have compiled a comprehensive overview. The document titled “A paper on biological responses to metal implants” (as of September 2019) contains information on metal implants for various indications including dental, hip and cardiovascular implants. The detailed article contains a special section dedicated to amalgam as a filling material. In addition to a detailed description of the various materials and their interaction with the tissues of the human body, the paper includes a list of biocompatibility tests (tests that are commonly used to assess a patient’s predisposition to intolerance) and elaborates on these in terms of their current uses, applications and indications.

The FDA committee not only tries to summarise the current scientific status, but also points out gaps and ambiguities in research in terms of materials behavior once implanted, the hosts of responses observed with metal implants as well as diagnostic and pre-implantation  hypersensitivity testing modalities and protocols. The document served as the basis for a public discussion by the Immunology Devices Panel of the Medical Devices Advisory Committee, which was held on 13 and 14 November 2019. The FDA is currently working on a written summary to be published in 2020. 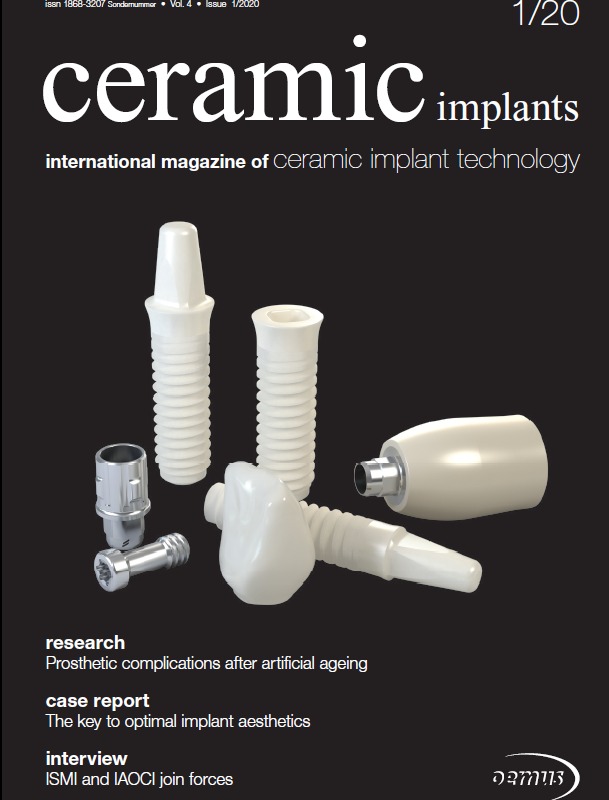 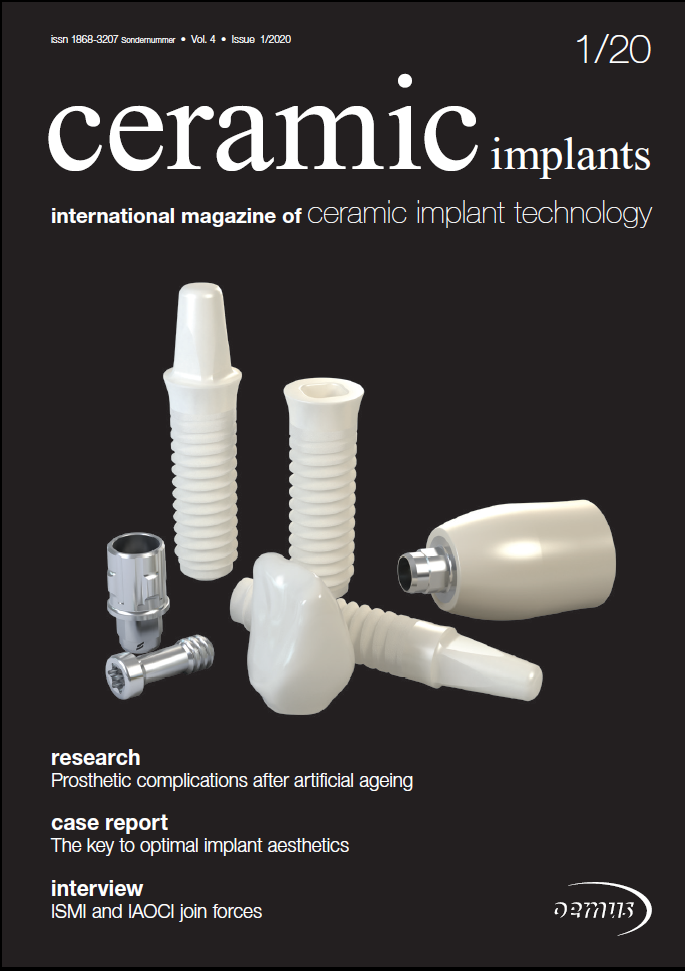 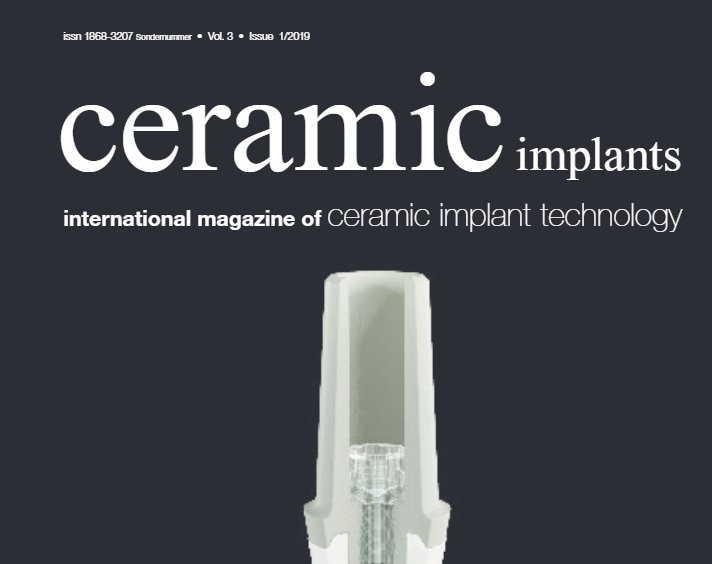 Dr. Dirk Duddeck, managing director of the Clean Implant Foundation interviews Dr. Noumbissi, founder and president of the International Academy of Ceramic Implantology (www.iaoci.com) on the impact contaminated implant surfaces can have on their success and recipient health. 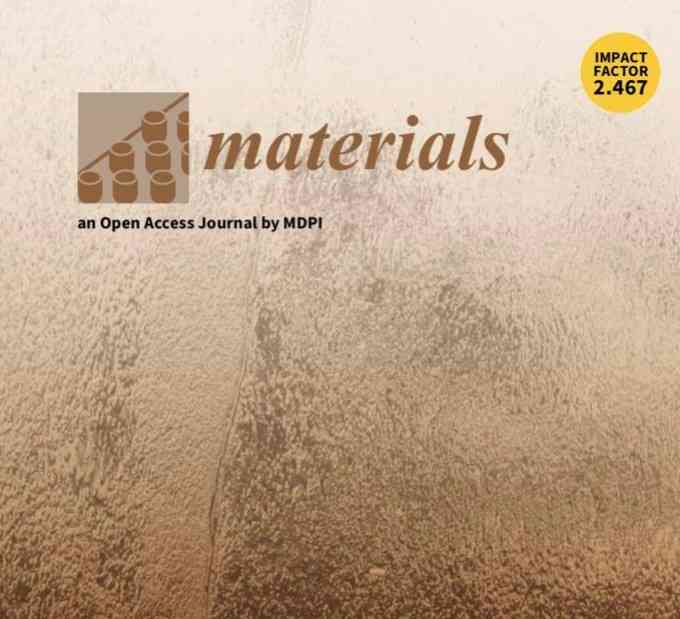 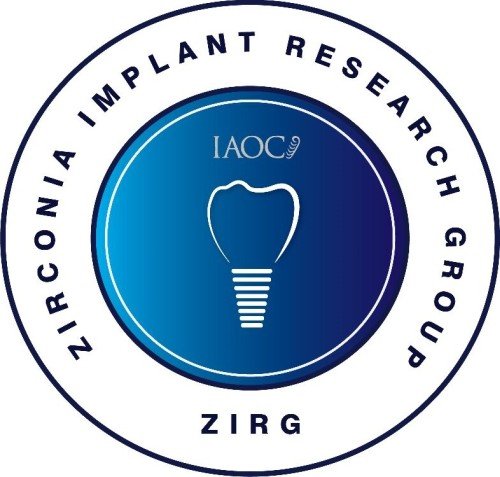 Titanium implants and silent inflammation in jawbone – a critical interplay of dissolved titanium particles and cytokines TNF-α and RANTES/CCL5 on overall health?

Titanium implants and silent inflammation in jawbone - a critical interplay of dissolved titanium particles and cytokines TNF-α and RANTES/CCL5 on overall health? 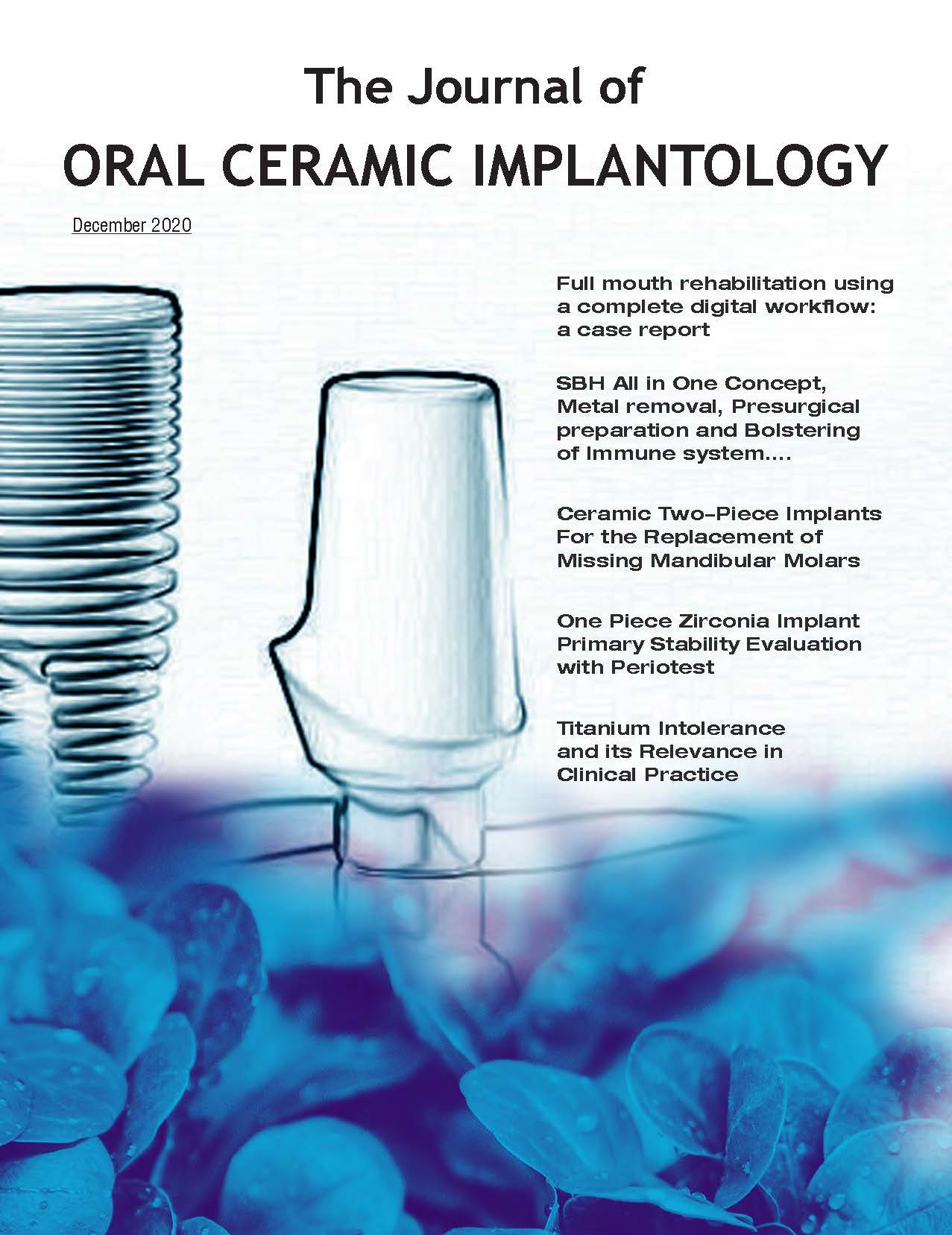 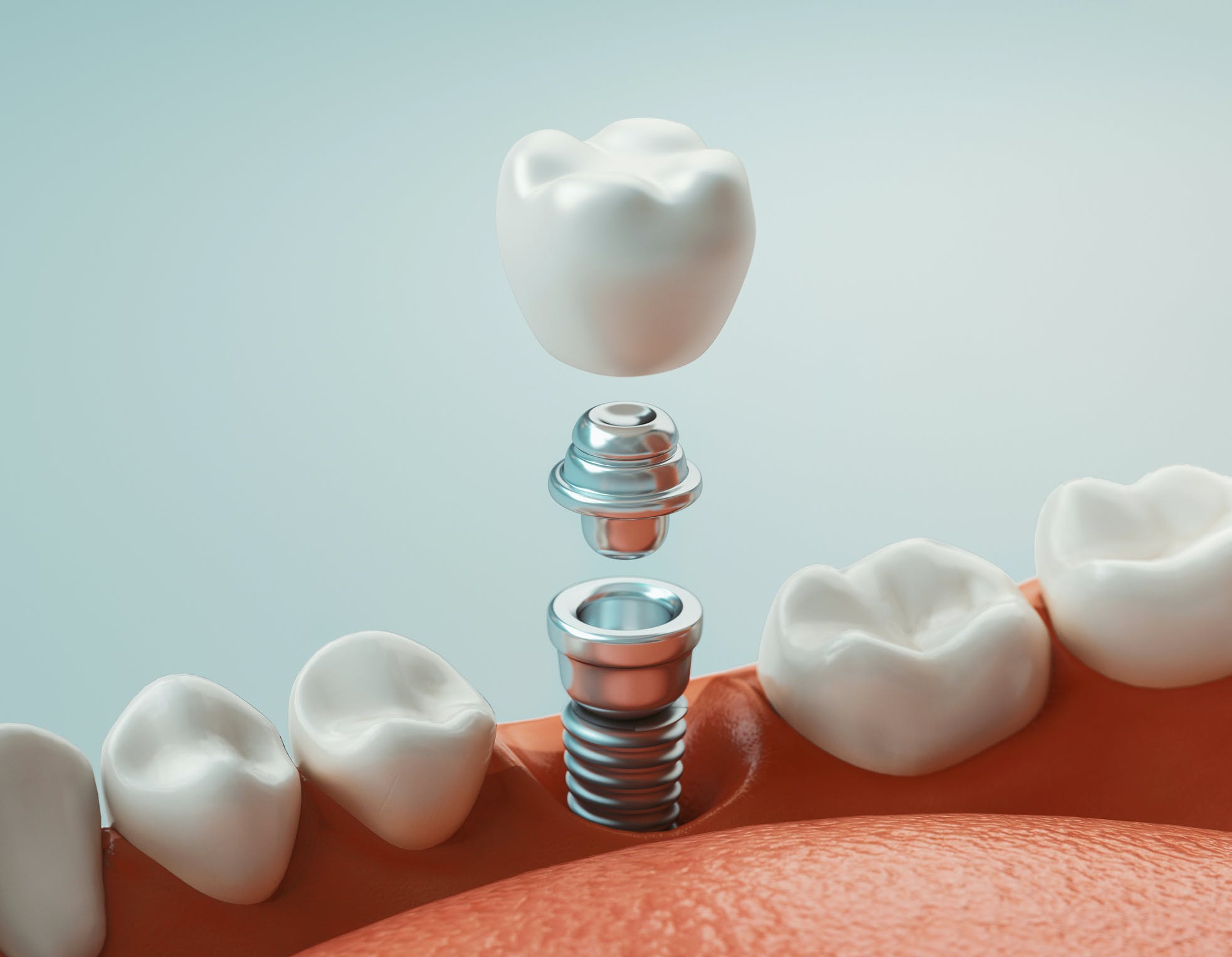 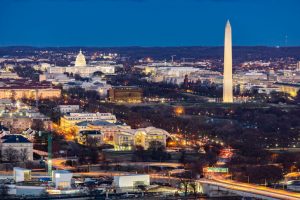